Possibilities of the reproductive clinic in the treatment of azoospermia

Over the past few years, the number of couples experiencing fertility problems has grown significantly. More and more men suffering from infertility are diagnosed with azoospermia, their number has grown to 20%. Azoospermia is a violation of spermatogenesis, characterized by the absence of spermatozoa in the semen. Depending on the reasons, obstructive and non-obstructive azoospermia are distinguished.

Azoospermia is accompanied by the inability to conceive naturally, and in some cases, with the help of assisted reproductive technologies. Azoospermia is diagnosed during the examination of the male reproductive status (ultrasound, testicular biopsy, determination of hormone levels, spermogram). With obstructive azoospermia, microsurgical restoration of the patency of the vas deferens is required; with a secretory form of pathology, carrying out stimulating hormonal therapy. In case of impossibility of natural conception, they resort to the use of IVF (ICSI).

Sperm pathology, including azoospermia, is always a reflection of male reproductive health problems, so the main efforts of specialists should be aimed at identifying and eliminating the causes of this condition.

Physiology and disorders of spermatogenesis

Spermatogenesis is the process of formation and maturation of male germ cells begins at puberty and continues until very old age. Sperm production occurs in the convoluted seminiferous tubules of the testicles and includes three successive phases: spermatogonia proliferation, meiosis and spermatogenesis. This process occurs most actively at a temperature of 34 ° C, which is ensured by the anatomical location of the testicles in the scrotum, outside the abdominal cavity. The final maturation of the sperm occurs in the epididymis.
The duration of the full spermatogenesis cycle in a man is approximately 73-75 days. Various kinds of unfavorable factors can disrupt the process of sperm formation and maturation, leading to various forms of pathospermia, the most common of which are: 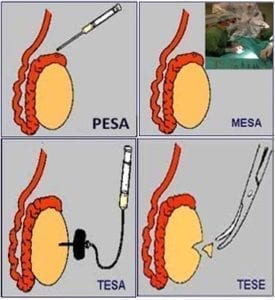 Given the causes of azoospermia, it can be obstructive, non-obstructive (secretory) and temporary.

At the heart of the obstructive form of azoospermia is the obstruction of the vas deferens, as a result of which spermatozoa cannot enter the ejaculate. At the same time, male reproductive cells are formed in sufficient quantities, have normal morphology and mobility. Causes leading to obstructive azoospermia may be congenital anomalies (aplasia of the vas deferens), inflammatory processes (orchitis, epididymitis, vesiculitis, prostatitis), trauma to the scrotum, varicocele, inguinal-scrotal hernia, urethral stricture, surgery on the scrotal organs hernia repair, surgery for hydrocele), etc.

With secretory (non-obstructive) azoospermia, sperm formation in the testes is initially impaired. The factors causing such a condition may be bilateral cryptorchidism, mumps complicated by epididymitis, testicular tumors, radiation exposure, toxic effects of heavy metal salts and pesticides.

Violation of spermatogenesis by the type of secretory and obstructive azoospermia can occur in hypogonadism, cystic fibrosis, diabetes mellitus, celiac disease, pituitary tumors, spinal injuries, syphilis and other pathologies. Temporary azoospermia is characterized by transient functional disorders on the part of the gonads and can develop against the background of acute diseases, stress, taking medications (steroid hormones, antibacterial and antineoplastic agents), frequent visits to saunas and baths. A temporary decrease in sperm production is noted in sexually active men with frequent intercourse.

The main specific symptom of azoospermia is male infertility. In this case, a man’s sexual function may remain intact. The rest of the clinical symptoms accompanying azoospermia are associated with the underlying disease. So, with hypogonadism in a man, the underdevelopment of secondary sexual characteristics is determined: poor hair growth, female physique, gynecomastia. Secretory azoospermia is often accompanied by testicular hypoplasia, micropenis, decreased libido, and erectile dysfunction. With various forms of obstructive azoospermia, a man may experience discomfort, pain, swelling, or swelling of the scrotum. On palpation, testicles of normal size and shape are determined, and the epididymis are enlarged due to the accumulation of spermatozoa in it. Obstructive azoospermia may be accompanied by retrograde ejaculation.

The causes and form of azoospermia can only be established by specialists based on a comprehensive examination of the male reproductive system. When collecting anamnesis, the frequency of sexual activity and the duration of the period of infertility, previous diseases, occupational hazards, the patient’s lifestyle and other factors are specified. During a physical examination, the body type, the severity of secondary sexual characteristics, and the condition of the external genitals are assessed. To exclude the pathology of the male genital organs, ultrasound of the scrotum organs, ultrasound of the prostate, ultrasound of the vessels of the scrotum, etc. are carried out. The study of the hormonal status in azoospermia (testosterone, prolactin, estradiol, LH, FSH) makes it possible to judge the hypothalamic-pituitary regulation of the activity of the gonads. To exclude retrograde ejaculation, post-ejaculatory urine analysis is performed. Testicular biopsy contributes to the differential diagnosis of azoospermia.

In all cases of azoospermia, treatment is aimed at eliminating the underlying cause of impaired male fertility. So, one of the ways to solve the problem of obstructive azoospermia is to carry out reconstructive operations that restore the patency of the vas deferens. The success of restoring fertility after surgical removal of obstruction of the vas deferens is up to 35%. To correct endocrine disorders leading to secretory azoospermia, hormone replacement or stimulating therapy is prescribed. With the help of a course of treatment for male infertility of hormonal genesis, in some cases, it is possible to achieve the appearance of sperm in the ejaculate. If, despite the undertaken surgical and conservative treatment of azoospermia, the partner’s pregnancy does not occur, assisted reproductive technologies come to the rescue, the most effective of which is ICSI. For in vitro fertilization, sperm are obtained by open or aspiration biopsy from the testis (TESA / TESE) or epididymis (PESA, MESA).

Candidate of Medical Sciences, urologist-andrologist of the highest category

Tags: 224, Treatment of azoospermia
Next post
“Delayed” motherhood. Creation of a personal bank of oocytes