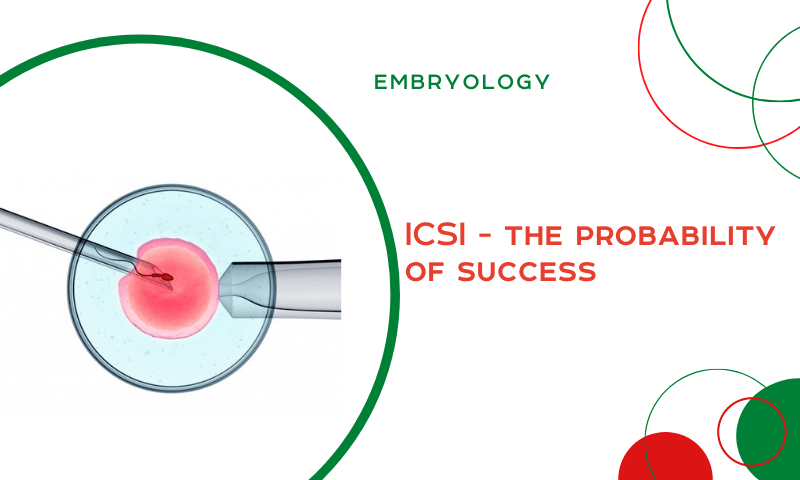 ICSI – the probability of success

In case of male infertility, the ICSI method is in great demand, since it is the only way to get pregnant for a woman paired with such a problem. The ICSI procedure is based on the fact that the embryologist takes in mature oocytes on the day of puncture. After careful examination under a microscope, the embryologist selects a morphologically satisfying and viable sperm. What criteria influence the choice:

Next comes the stage of fertilization by an embryologist. This happens in microdroplets of a special environment, where oocytes are already waiting for this hour.

Fertilization rates after ICSI vary from 30% to 80%. It all depends on the quality of spermatozoa and oocytes and, of course, the work experience and technique of the embryologist.

Conditions for a successful ICSI:

By itself, the ICSI procedure is not capable of leading to genetic disorders in the offspring.

But, if there is evidence, then it is recommended to conduct preimplantation genetic testing to select embryos without chromosomal abnormalities.

If a man has a severe form of infertility with impaired spermatogenesis (this is the process of sperm formation). If the conclusion of the spermogram is azoospermia or oligozoospermia (the presence of spermatozoa is less than 10 million / ml), then it is definitely recommended that a man perform such an analysis as karyotyping.

When should you carry out the procedure?

The ICSI method is performed for serious or incurable forms of infertility – for example, when single spermatozoa are detected or during retrograde ejaculation: the semen does not enter the outside, but into the bladder. It is very important, having found viable spermatozoa in the urine sediment, immediately process them using a special technique.

Today, thanks to the ICSI method, those couples who could never have had children before are getting a chance for happy parenting. Most importantly, never despair, the right approach to pregnancy planning before the IVF procedure, be sure to undergo genetic counseling in those cases when it is indicated.