How DNA damage to sperm is related to male reproductive function

When examining a couple for infertility, doctors need to thoroughly study all the factors that directly or indirectly affect the success of conception and further pregnancy. In some cases, a lot of additional research is being done to help uncover the cause behind the superficial study. Difficulties with the process of fertilization and the proper development of embryos may be associated with damage to DNA molecules, which are based on genetic information responsible for the work of cells in the human body.

What will help the study of DNA damage

Reproductive medicine is closely linked to the study of DNA damage, including sperm DNA, which can lead to a significant reduction in the possibility of their normal functioning, and therefore impaired reproductive function in men.

The most common type of disorder is multiple microdamages or sperm fragmentation. This entails an increased likelihood of errors in the genetic material, which in turn leads to various genetic abnormalities in embryos.

Where do the roots of this problem come from? Why are such abnormalities in the DNA system of sperm increasingly common in modern men? There are several explanations, including:

Assessing the possibilities of male reproductive function, the main analysis is a spermogram, which provides information about the motility of sperm, their concentration and morphology. For all the importance and detail of this study, unfortunately, it does not provide information about the state of sperm DNA, but the answer to this question may be the main cause of male infertility.

DNA damage as a major factor in male infertility

The main task of sperm is to introduce into the body of the egg genetic material, which can further ensure the healthy development of the embryo. To find out the hidden causes of male infertility, the most informative study is used today, which assesses sperm DNA fragmentation.

Speaking in numbers about the frequency of the problem: about 8% of men, patients of reproductive centers, have a history of high sperm fragmentation. The presence of such a factor entails:

Reproductive doctors, assessing the state of the male reproductive system, conclude that in such situations, the best solution would be IVF or ICSI. In some cases, more complex methods may be assigned, such as: PIXI or IMSI. You can learn more about what these procedures are from a reproductive health doctor at the Lada Reproductive Health Clinic.

When it is necessary to pass the analysis for fragmentation

Referral to this study may be given by a reproductive doctor in the following cases:

If after passing the test, its result is disappointing, the andrologist prescribes a course of therapy, which is designed to improve the fragmentation of sperm DNA. At the same time, patients are advised to monitor their health more closely and to eliminate as much as possible from their lives all the negative influences that reduce the possibility of reproductive function. 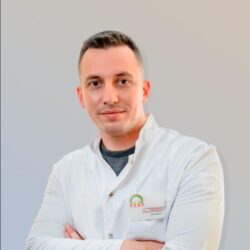 Kuznetsov Dmitry
Andrologist, urologist
Previous post
What is amniocentesis?
Next post
Answers to questions from the endocrinologist Morshneva Svetlana Petrovna