Main Page » Blog » Endometriosis and how to deal with it Endometriosis and how to deal with it

The diagnosis of endometriosis is increasingly appearing on patients’ story pages. To understand what kind of disease it is, you need to understand where it originates from.

The culprit of the tragedy

The inner cavity of the uterus is lined with a special tissue called the endometrium, a very complex tissue with one very important feature – it is extremely hormonally sensitive. The endometrium thickens significantly, becomes richer in glands and is heavily supplied with blood in the last phase of the menstrual cycle under the influence of female sex hormones. The main purpose of the endometrium is to create conditions for the attachment of a fertilized egg to the uterus and its further development. During pregnancy, the endometrial tissue expands, is part of the placenta and delivers oxygen and nutrients to the embryo.

How does the disease begin

Contrary to the wishes of nature, not every woman’s menstrual cycle ends with pregnancy, so the endometrium is regularly updated. During menstruation, the endometrium is rejected, the cells of which are excreted from the woman’s body naturally. This is ideal, but in real conditions, in some cases it happens differently. How exactly endometrial cells penetrate into surrounding tissues is not yet clear, there are several theories explaining the appearance of endometriosis. It is believed that it is possible to throw menstrual blood into the abdominal cavity through the fallopian tubes, where endometrial cells are grafted and begin to grow. This is how begins external endometriosis . If endometrial cells enter the muscle layers of the uterus and begin to grow there, then internal endometriosis. Also distinguish genital (within the uterus and ovaries) and extragenital (outside the reproductive system) endometriosis. When they enter a favorable environment, endometrial cells are able to develop and form tissues in places that are completely not intended for this by anatomy. Some scientists believe that the cause of the ailment is a violation of the development of the female body even in the womb, where endometrial cells initially fall “in the wrong places” and subsequently develop, others sin on weakening the immune system unable to cope with “offenders”. Also, the disease can cause unsuccessful surgical intervention, hormonal imbalance and many other, possibly not yet clarified factors.

Manifestations of the “mysterious” disease

Manifestations are varied, however there are a number of characteristic symptoms.The pain is usually in the lower abdomen and occurs most often before or during menstruation. A few days after menstruation, the pain subsides. In addition, there is soreness during intercourse. Other signs of endometriosis are heavy menstrual bleeding, which is often darker in color. Blood clots may appear. Bleeding between periods is not excluded. After the end of menstruation, the discharge becomes slimy. The menstrual cycle is often disrupted. These symptoms of endometriosis in women are the most common. However, other signs of endometriosis may also join: depression, possibly depression, endocrine disorders, impaired reproductive functions, etc. It should be noted that the symptoms also depend on the localization of pathological foci. For example, with damage to the ovaries, pain may be noted in the groin or lumbar region. With the spread of foci to the peritoneum and damage to the pararectal tissue, pain is localized in the pelvic region, etc.

A characteristic symptom complex allows one to suspect endometriosis, but a number of instrumental studies are required to confirm the diagnosis. Moreover, given the possibility of endometriosis developing outside the organs of the female reproductive system, for example, in the pleural cavity, an extended set of examinations may be required. Basically, to clarify the diagnosis, it is enough to carry out: 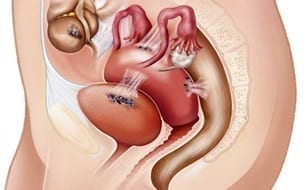 Methods of treatment of endometriosis

Methods are not as diverse as its manifestations and the disease can be stopped conservative and surgical way. The basis of medical treatment is hormonal therapy, but in addition to it, a woman is prescribed anti-inflammatory and sedative medicine, recommended to change her lifestyle and increase overall immunity. Of the hormonal medicine are used oral contraceptives, IUDs with hormones, gestagenic medicine with progesterone derivatives, androgens. Treatment is long and is carried out under the supervision of a doctor for 3-9 months or longer. If the therapy is ineffective, sometimes surgery is required. It is necessary if endometriosis has caused the formation of adhesions, polyps and cystic formations. Young women undergo organ-preserving operations, during which the lesions are removed, after which hormonal therapy is indicated. After the course of treatment, IVF is performed. With endometriosis, it is recommended to become pregnant as soon as possible in order to prevent the development of a relapse. This is due to the fact that during pregnancy and lactation, cyclical changes do not occur in the uterus, which has a beneficial effect on the course of the disease. But it should be borne in mind that as a result of mucosal defects, problems may arise both during implantation of the ovum into the uterus, and during the further development of pregnancy. Therefore, such patients should be under constant medical supervision. It should be emphasized that for this category of women IVF is sometimes the only opportunity to become a mother. Unfortunately, there is no uniform management tactics for patients with endometriosis referred for IVF. So does IVF help to get pregnant with endometriosis? World experience says that it is possible, and the probability is high, so that this trouble can be overcome on the way to happy motherhood.