Main Page » Blog » Bending the uterus … an obstacle to conception? Bending the uterus … an obstacle to conception?

Gynecologists call a bend of the uterus a condition in which the body of the uterus deviates relative to its neck and its normal anatomical location in the small pelvis.

Cervical bending (retroflexion) is not a disease, but a pathology. A similar anomaly can be in a woman from birth, and can be the cause of the inflammatory process.

A medical examination will reveal various options for the pathological location of the uterus in the pelvis:

If this state of affairs was from birth, it is simply an individual anatomical feature as a result of any malfunctions in your mother’s pregnancy.

Usually such a bend is insignificant and cannot affect the sexual function, reproductive health and the ability to conceive and bear a child. This bend of the uterus will not manifest itself in any way, and you probably will never know about it, since after childbirth it will most likely cease to exist at all.

And if the bend of the uterus arose after the birth of a woman, it is necessary to determine the cause that caused this phenomenon:

The main symptoms of retroflexion can be – painful menstruation, heavy periods, pain during intercourse, the appearance of clots.

Uterine bending at the current stage of development of technology is easily diagnosed at the examination by a gynecologist and is confirmed by ultrasound, when examined with a vaginal probe.

As soon as a woman finds out about her diagnosis, her main question becomes – how to get pregnant when the uterus is bent and is it possible to conceive naturally in general? Gynecologists do not consider this condition an obstacle to the onset and gestation of pregnancy, although they confirm that in the presence of this pathology, the patient is somewhat more difficult to conceive.

With congenital or physiological bending, no treatment is required, the woman lives and has sex as usual, and pregnancy is not difficult.

With pathological bends of the uterus, treatment tactics are determined based on the reasons. Usually, during the adhesion process, laparoscopic surgery (through small punctures in the abdominal wall) is done to dissect the adhesions. If the bend of the uterus is caused by inflammation, antibiotics, anti-inflammatory drugs and physiotherapy are required.

In order to increase the chances of pregnancy, a woman is prescribed to perform special physical exercises, physiotherapy exercises, depending on the side the uterus is rejected, the couple recommend different postures during intercourse that are most conducive to pregnancy. When bending from behind, the position of a woman on her stomach is considered to be a position favorable for conception. The partner is at the back. When the body and cervix are bent in the front, conception occurs only when having sex in a missionary position – the woman is lying on her back, the partner is on top. After the end of the act, in this case, a woman places a pillow under the buttocks, and it should lie another 15-20 minutes.

Bending the uterus is not a diagnosis, and does not require treatment, but lifestyle modifications! 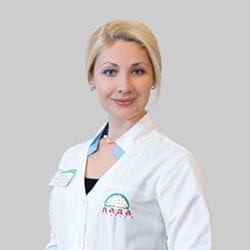 Danylova Kateryna
Reproductionist, obstetrician-gynecologist of the first category.
Next post
Can’t get pregnant. Why?