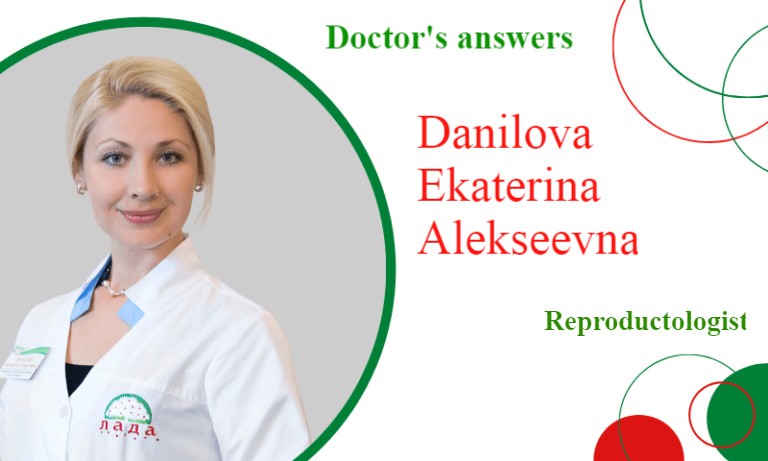 Answers to questions from the reproductologist Danilova Ekaterina Alekseevna

What does the hyaluronic binding test show?

The GTS shows what percentage of motile spermatozoa can recognize an egg and interact with it, that is, to perform fertilization. In the event of a deviation from the norm, the PICSI procedure is recommended.

How often is it necessary to take the mar test and hyaluronic.

Mar-test is subject to change. GTS, as a rule, is recommended to be given once to men who do not have children conceived naturally. But, in any case, a urologist (andrologist) and a reproductologist direct such studies of the patient’s seminal fluid.

Good afternoon, the diagnosis of rheumatoid arthritis, both tubes removed; poor ovarian response; is IVF possible or only in the program of donor oocytes?

Recommended oocyte donation program in the absence of contraindications for gestation. If there are such contraindications, then the program of donation of oocytes with surrogate motherhood. With a weak ovarian reserve, a poor response to stimulation, one can try IVF in the natural cycle with the accumulation of embryos and subsequent PGT-A.

4 frozen at a period of 7-8 weeks of pregnancy. Thrombophilia, bicorn, terazospermia.

An IVF program with surrogacy and PGT-A is recommended. It is possible to carry out hysteroscopy to select the final tactics and method of ART, in order to understand whether the cause of habitual miscarriage was in congenital uterine pathology.

What is the maximum number of embryos you carry?

Selective transfer of one embryo (SET).

It is also possible to transfer two embryos into the uterine cavity for medical reasons and with the consent of the patient.

The diagnosis of endmentrial cysts in the ovaries is made. Recommend to do the removal of cysts.

Removal of endometriomas by laparoscopy is performed with sizes of endometrioid cysts greater than 30 mm. Before planning such a surgical treatment, you must always consult a reproductologist. Since there are certain nuances in the management tactics of such patients. The most important thing is to preserve the ovarian reserve as much as possible.

Is it worth it to freeze an ovule ovule before an operation?

Before extensive operations on the pelvic organs, it is recommended to create your own cryo-bank of oocytes

Can a child born from IVF become a parent in the future?

Sure. And confirmation of this is Louise Brown herself (the first child in the world born after IVF), who has twice become a mother, and pregnancy has come on her own.

What is the chance to get pregnant on your own after ovarian laparoscopy?

Provided that at least one fallopian tube is passable, the cycles are ovulatory, then there are chances for 6 months. And if during this period an independent pregnancy does not occur, then it is advisable for such a patient to carry out an IVF program.

Is hysteroscopy necessary to do before IVF?

Hysteroscopy before IVF is recommended only for medical reasons.

If we are talking about a repeated IVF attempt (with a negative first attempt), then hysteroscopy is mandatory.

Are there any useless tests that do not need to be taken?

Great question! To which I want to answer with a question. And who decided that the prescribed examination of a married couple, according to Order 787 of the Ministry of Health, is useless? If a married couple wants to get pregnant, have a healthy baby while their mother is healthy, then the list of examinations does not raise such questions and doubts.

Progesterone deficiency, progesterone is good only on drugs, is IVF really necessary?

If there is no diagnosis of Infertility, then the second phase of the cycle can be adjusted by gestagens to maximize the chances of an independent pregnancy.

Is a constantly elevated prolactin index an indicator for IVF?

Hyperprolactinemia per se is not an indication for IVF. Further examination and correction of prolactin levels is necessary.

How to start preparing for pregnancy after myomectomy by laparoscopy.

What is the principle of gonadotropin preparations?

The choice of the “protocol” of controlled ovarian stimulation and gonadotropin preparations is a purely individual process.

It is very important to evaluate many factors: age, AMH, FSH, LH, the number of antral follicles, weight, the presence of concomitant extragenital problems in a particular patient.

I’m afraid of twins, how can this be avoided?

Selective transfer of one embryo eliminates chromosomal pathology in a singleton pregnancy.

And if the woman is young, and the reserve is like an adult woman? Is that bad?

In case of premature ovarian exhaustion, counseling in a reproductive clinic is advisable. Perhaps oocyte cryopreservation will be recommended in order to create your own bio-bank. Or conducting an IVF program as indicated.

Next post
Answers to questions from the embryologist Sinenko Vitaliy Vladimirovich