Polyp in the uterus: causes, diagnosis and treatment 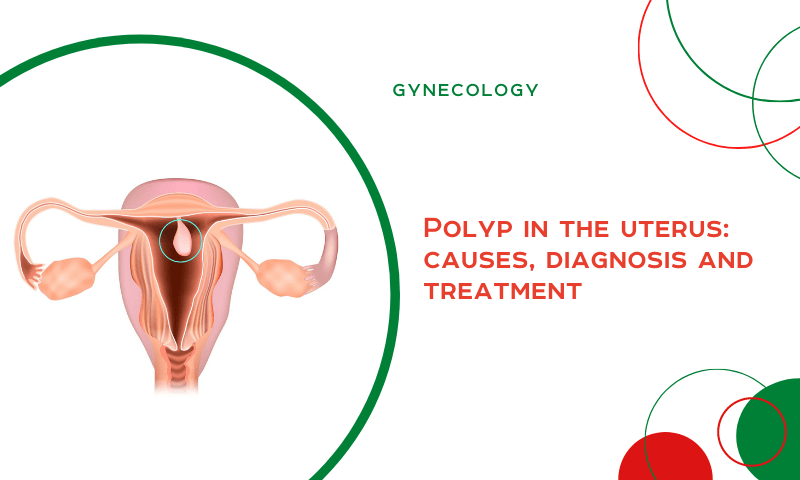 Uterine polyps – benign neoplasms in the uterine cavity resulting from the proliferation of endometrial cells. At the initial stage, this process is usually asymptomatic.

If multiple growths are present or grow to large sizes, the following symptoms may appear:

The manifestation of more serious pathologies is also possible, such as:

Symptoms are not specific to other gynecological conditions, so polyps are often detected during a detailed examination or when done diagnosis and treatment of infertility.

Every month, the inner layer of the uterus (endometrium) is renewed in the female body. At the beginning of the cycle, it is prepared for the adoption and successful implantation of a blastocyst (fertilized egg). During this period, the endometrium has optimal thickness and structure. If there is no blastocyst and pregnancy does not occur, the upper layer of the endometrium is detached and unclaimed tissues are released during menstruation. After that, the body again begins to prepare the mucous membrane for a new cycle. If during this process a failure occurs, then various pathological manifestations occur, including endometrial polyposis.

Depending on cell morphology (cell composition) endometrial polyp can be: glandular (involving glands), fibrous (from fibrous fibers), glandular-fibrous (involving both tissues), adenomatous (from altered glandular cells that develop into malignant). Separately, placentals are isolated – they arise from the remnants of the placenta during severe childbirth or abortion due to incomplete curettage. Visually, it looks like a kind of mushroom – an accumulation of knotty tissues on a thin stalk with which the polyp is attached to the wall of the uterus.

Causes of polyps in the uterus

This pathology is quite common and occurs in 8-20% of women (depending on age and risk group). Today, there is no exact reason that affects the change in the structure and degeneration of endometrial cells. However, there are a number of factors that directly affect the incidence of the disease. Among them, a violation of the hormonal background, in particular, an increase in the level of estrogen (due to disruption of the ovaries).

The likelihood of uterine polyps is also affected by:

Therefore, a simple answer to the question of what to do, in order the polyps do not grow in the uterus, does not exist. But, in order to reduce the likelihood of this disease, you must regularly undergo a gynecological examination, control your menstrual cycle and do not forget about the treatment of diseases that contribute to the occurrence of polyps.

How quickly a polyp in the uterus grows depends on the characteristics of the organism and catalyzing factors in each case.

Is it necessary to remove a polyp in the uterus or medication will help?

A gynecologist can diagnose the presence of polyps based on the survey and the use of ultrasound. Based on the diagnosis, a decision is made on further treatment.

If the polyps are minimal and do not cause any discomfort to the woman, then monitoring of the course of the disease is likely to be recommended without any manipulation.

Medication is used in single cases of minimal polyps and when trying to delay surgery in nulliparous women.

If endometrial polyps are significant or their growth is noted during observation, then the patient will be recommended to undergo hysteroscopy – minimally invasive surgery.

The purpose of this manipulation is both a more accurate diagnosis and removal of polyps. A hysteroscope is a device with a flexible tube and camera. It is injected through the cervix into the uterine cavity for medical manipulations.

Since endometrial polyposis can be a harbinger of cancer, removed tissue is sent for histological examination in order to determine its malignancy.

Hysteroscopy or surgery to remove polyps in the uterus takes about 20 minutes, is performed under anesthesia (at the Lada Clinic we use medication sleep) does not leave scars. It is also possible to prescribe supportive drug therapy to complete treatment at the discretion of the attending physician to prevent recurrence of polyps in the uterus.

Lifestyle after removal of a polyp in the uterus does not imply restrictions. Upon completion of the procedure, pain in the lower abdomen and spotting are possible. They will pass by themselves within a week. For two weeks it is recommended to exclude sex life, bathing in a bathtub and open bodies of water.

After a while, you need to repeat the check with a gynecologist and an ultrasound scan to exclude a relapse.

If a polyp in the uterus is cured in a timely manner, the consequences are from it will be minimal.